This month on Dispodopolis, we discuss the sixtieth anniversary of Pollyanna. It was the first movie that Haylee Mills appeared in for the Walt Disney Studios and Disney was coming into their golden era of live-action films. A talented cast surrounded Hayley Mills, and that cast had been working in Hollywood since silent films had graced the screens. We also discuss some of our favorite parts of this movie and how it affected our lives growing up and how it continues to change the way we see the world.

It is hard to believe that it has been sixty years since Pollyanna was released in the theaters. I grew up watching this movie as it was played on the Sunday night standard, Wonderful World of Disney and appeared on other local channels. It fit right in with Americana from the early twentieth century that was being seen across the country on televisions screens in the late seventies and early eighties. There was a need to return to a seemingly simpler time that was represented by Pollyanna. Pollyanna's optimism and hopefulness were greeted by those living in the 1970s and 80s with open arms. The movie helped ward-off all the unrest that surrounded us during this time. It gave us a glimpse into our grandparent's childhood.

Pollyanna had a hard life losing both her mother and father in a faraway land isolated from the world of her parent's family and friends. Her parents dedicated their lives to working in developing countries. They lived a life of service, assisting those who needed the most. When Pollyanna lost everything she knew, she was delivered to an aunt that was cold and distant. Aunt Polly even asked her to stop referring to her parents and their guiding words. Pollyanna combatted the townspeople's disdain by always reminding them of how beautiful their world and lives were.

Pollyanna was originally published in 1913 and was penned by Eleanor Hodgman Porter (1868–1920). Eleanor was born in Littleton, New Hampshire, the small town that inspired the town that she writes about in Pollyanna. Porter attended Littleton High School until she became too ill to finish and continued her education at home with a tutor. She went on to study at the New Hampshire Conservatory of Music and was part of Cambridge's choral society.

There isn't much known or written about her adult life, but in 1892, she married a local businessman John Lyman Porter and moved to Massachusetts. She wrote her first novel, Cross Currents, in 1907. She wrote more than 200 short stories and 15 novels over her lifetime. Post humorously, she was awarded the national and state recognition as A Notable Woman of New Hampshire in 1990 by the National Organization of Women. Her greatest recognition came from the series of books that followed the life of Pollyanna.

Pollyanna has become a colloquialism for someone that is excessively cheerful or optimistic. From an interview, we learn that Porter didn't appreciate the stigma that had been attached to Pollyanna. Porter is quoted as saying, "the message of the book was never intended to be 'blind optimism.' Pollyanna did not pretend that everything was sugar-coated goodness; instead, Pollyanna was positively determined to find the good in every situation." This misinterpretation is something Walt Disney also encountered with his creation, Mickey Mouse. The negative connotations came in the expression, "Mickey Mouse Operation."

Walt Disney handpicked Hayley Mills to star in Pollyanna, and she was not the first choice of the director, David Swift. Not to worry, Haylee Mills won over David Swift, and he cast her in the next Walt Disney Production, The Parent Trap. The minute Haylee Mills steps on the screen, you understand why. Her natural presence and ease on the screen brought the story of Pollyanna to life for generations of children. Pollyanna wasn't her first film, but it was her introduction to an American audience. She would continue to entertain us through the magic of Disney for the next decade. 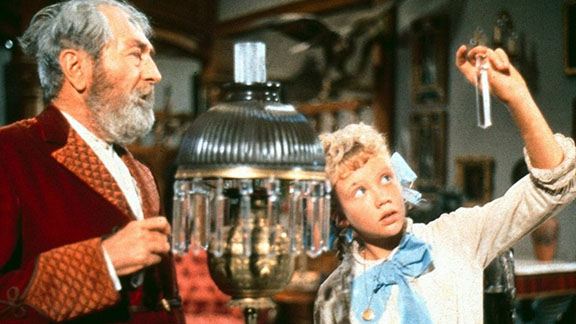 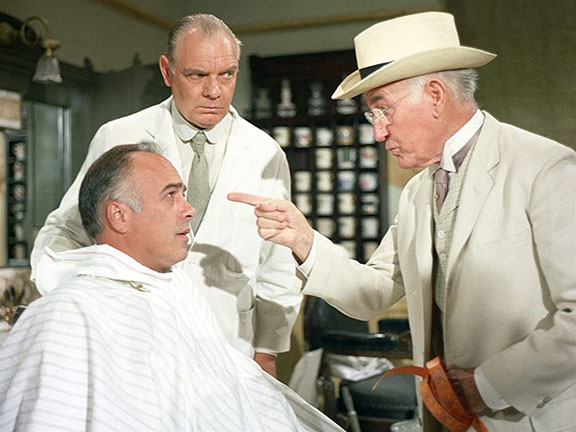 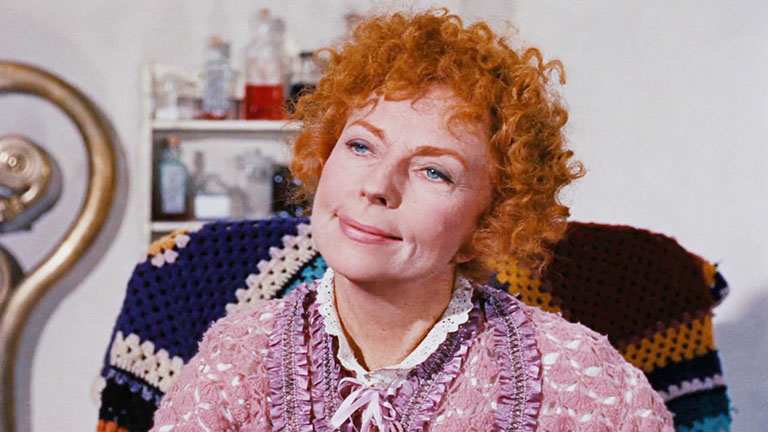 Hayley Mills worked with a fantastic ensemble of actors that brought over forty-five years of Hollywood to the screen. Many had started acting during the golden age of the silent movies. Two of those actors were Donald Crisp and Adolphe Menjou. Donald Crisp was well known to audiences of the silent film days. He graced the screen in Wuthering Heights alongside Lawrence Olivier and How Green Was My Valley with Maureen O'Hara, who was cast in The Parent Trap with Haylee Mills. Donald Crisp plays the mayor that wants the people to reclaim the direction and decisions of the small town. Adolphe Menjou plays Mr. Pendergast, an eccentric bachelor that traveled the world and obtained his wealth through his travels. He has resigned himself to live alone with his memories and intrinsic treasures. Adolphe Menjou was a studio actor from 1914-1958 and appeared in over 150 movies. His most significant tie to Disney was his appearance in Paths of Glory with Kirk Douglas, who acted in 20,000 Leagues Under the Sea.

Jane Wyman and Richard Egan play the two love interests that bring weight to the story. Jane Wyman was a B actress in Hollywood until her breakthrough role Johnny Belinda in 1948. It is a dark film that would earn a current rating of PG-13. She also had a dramatic personal life with five marriages, including one to the future President, Ronald Reagan. Jane Wyman plays Aunt Polly and is the namesake of Pollyanna. Aunt Polly is austere, proper, and lacks the ability to show love towards Pollyanna. She is oblivious of what Pollyanna needs. The only comfort she shows is a material gift of clothing. Her motivation for that gift is purely superficial and shows the town that Aunt Polly can provide for her niece. You could also argue that Aunt Polly doesn't know how to show any kindness other than a monetary one. Jane Wyman brings her natural icy exterior to Aunt Polly that keeps all at bay in the small town of Harrington, and her authority goes unchecked. She is the matriarch of the town.

Richard Egan, who plays Dr. Edmond Chilton, brings an introspective to Aunt Polly’s character and challenges her established life. He returns from the big city to win back her love, but he finds Aunt Polly surrounded and praised by the townspeople. Everyone cowers before her, and she is lonely held up in her castle, reigning over the banks and local businesses. She also has the church’s pastor in her back pocket. Richard Egan brings the original “smolder” to the screen, and his film career takes off in the 1950s. He reaches his pinnacle in the 1959 film, A Summer Place, which is one of the original teenage angst movies. This movie is a must-see for all of those that love Grease and the song, “Look at me, I’m Sandra Dee.” After Pollyanna, most of his roles are on the small screen. He went on to television after that. His last work was on a soap opera called Capitol.

One face to every Disney fan will immediately recognize is Kevin Corcoran. He plays the orphan Jimmy Bean, who lives at the Harrisburg Orphanage that is maintained by Aunt Polly and the Harris family. There are a lot of orphans in this small town. He is Pollyanna’s sidekick and lands Pollyanna in trouble quite a few times. Kevin Corcoran is also known as Moochie on the Mickey Mouse Club and seen in numerous Disney movies from Old Yeller to Swiss Family Robinson. He turns to directing and producing in Hollywood and can be seen in the credits for Murder She Wrote and Providence.

A large portion of actors that appear in Disney live-action movies began to struggle at the end of the 1950s and 60s. The main reason for this was the end of the Studio System in 1948. The verdict that ended the studio is the anti-trust case United States vs. Paramount Pictures, Inc. The studio system had complete control from the actors' contracts to the distribution in the theaters. The system didn't wholly deteriorate until the early 1960s. There were immediate ramifications felt at Paramount when their profit dropped from 20 million in 1948 to 6 million in 1949. The judgment handed down by the courts helped small and independent studios, distribution companies, and theaters. Disney was one of those studios that benefitted, and this change helped them create incredible live-action movies in the 1950s and 60s. As the Disney Studio headed into the 1970s, the loss of Walt Disney in 1966 disrupted the studio's direction.

Like most movies filmed in Hollywood, Pollyanna was also filmed on many studio lots across Los Angeles. There are a few exceptions to this, and one is Aunt Polly's house. You can find that house in Santa Rosa, California, and it is locally known as the McDonald Mansion or Mableton. The house is actually a two-story 14,000 square foot home. A lot of Hollywood magic from a scene designer and a few painters re-envisioned it as the four-story mansion you see on the screen. One other notable building used is Railroad Station in St. Helena, California.

We hope that our conversation and evaluation of Pollyanna will encourage your family to add it to the most watch list of 2020. Don't forget to play the Glad Game with your family. It helps you focus on what is important in our lives. I know it has helped me over the last forty years. We need to stop focusing on the grass on the other side of the fence and start focusing on how beautiful the grass is on our side.

Before we have our discussion about Pollyanna, we discuss a time when we were at a Disney park, we thought something would not go well, and it turned out to be a great moment. We each have a different experience at a different park that brought a smile to our faces. We have weathered meltdowns, having to leave early, physically melted ion the sun, and been treated rudely by cast members. But the good far out weight the bad, and that is why we return. Which experience at a Disney Park brought a smile to your face when you thought it wasn't going to go well.

We would love to hear from you and your family. If you have any comments, questions, or fun and fancy-free thoughts, email us at comments@dispodopolis.com. Please enjoy our latest podcast, Dispodopolis.