Podcast No. 0031: Welcome to the Jungle of Animal Kingdom

On this trip to Walt Disney World, we decided to fly to Orlando and take the Magical Express. We also choose to take our luggage on the bus with us because it can be up to a three-hour wait to receive your luggage. We have learned that the first day of our trip is always dramatic, with anxiety and full of mishaps. This trip lived up to the hype. The first significant stress moment came when my daughter realized she had left her phone on the Magical Express, which is not run by Disney. The Mears company runs the Magical Express, and we weren’t able to get a hold of the driver and, after two hours, came to the conclusion that her phone was stolen. The Mears staff searched the bus at the end of the day and in the morning. Her phone was never recovered. If anyone needs to know to get to the local AT&T store, we are experts. The staff is extremely amiable and helpful. 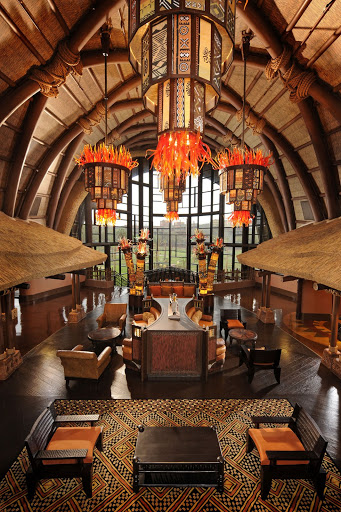 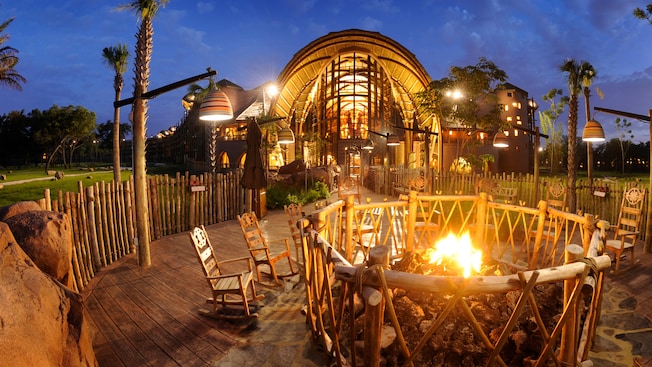 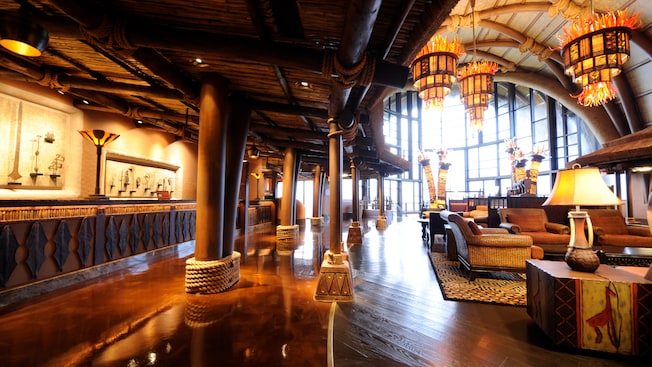 The second struggle was dinner. We didn’t make it to our hotel until 11:00 pm and the closest counter food service available was half a mile away at the Jambo House. Not feeling up to the task of the hike, we opted to call to have a pizza delivered. Unfortunately, that would involve a two-hour wait. Knowing we had lost, candy, cookies, and crackers were on the menu. We all decided to turn in and call it a day. In a pinch, the Sanaa Lounge is open late if you need a quick bite, but we had reservations for the morning. 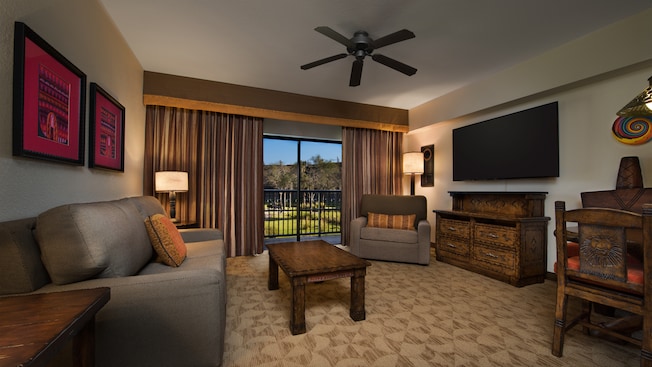 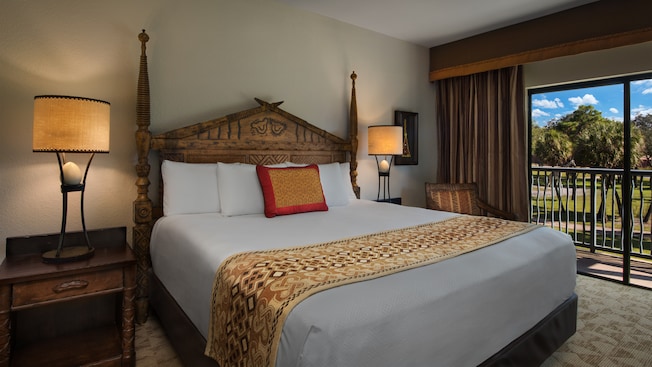 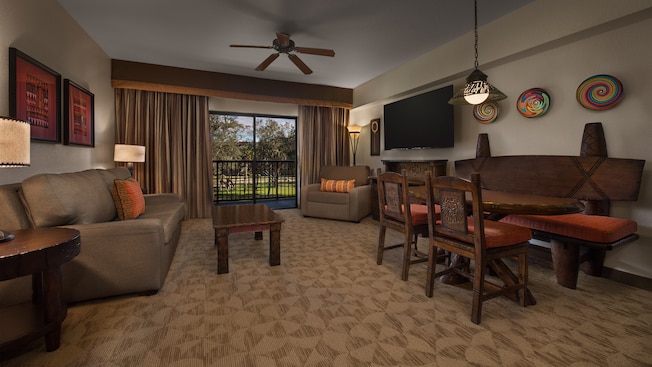 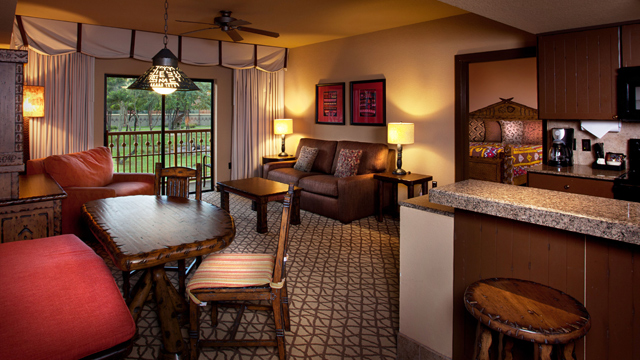 Fortunately, we had booked a one-bedroom suite using our DVC points. The suite included a view of the savanna, so we were greeted in the morning by giraffes, zebras, water buffalo, and African storks. They are kept at a distance for their safety and ours. But it is very relaxing to lounge on the terrace with this morning view. The room has plenty of room for five guests with a king bed in the main bathroom and a pull-out couch and chair in the living area. There is a galley kitchen that opens up to a table to seat four people for a meal. Two full bathrooms plus a washer and dryer seal the deal for a family like ours.

In the morning, we had brunch reservations at Sanaa. We also had not been to Sanaa in nine years. I believe it had just opened the last time we experienced the restaurant, and we could just walk up and get a table. Unlike when it first open, now you need to make a reservation to experience this restaurant. The food did not disappoint and was a great visual experience, as well as a tasting experience. We had a booth along the wall, so we weren’t able to see the animals along the glass wall, but the theming makes up for the lack of views. You have to try the “Bread Service”; it is an authentic taste experience that leads you down the Spice Trail of the Middle Ages. Don’t worry; they have a children’s menu with traditional favorites for those kids that aren’t as adventuresome.

We end our discussion with some of the great amenities at the Animal Kingdom Lodge. One being the Samawati Springs Pool Area, it is an excellent place for the family with plenty of things to do in the water as well as on the deck. The fires are burning at the main entrance, outside, and throughout the lodge. There is also a beautiful deck to walk out to experience a 360-degree view of the savannah that runs the length of the lodge.

We only spent two nights at the Animal Kingdom Lodge, so we decided to spend our full day at Disney’s Animal Kingdom. It is always a fun park to experience, and there are always new and fun things taking shaper there. We had a few new to us an all meet and greets, tried out the new Animation Experience at the Conservation Station, and finally saw Finding Nemo the Musical. We also reviewed a couple of restaurants and treats along the way.

The day began with our traditional photo in front of the Tree of Life. Who should photobomb us but Kevin, the snipe bird from the movie UP. We were utterly clueless about her presence and were so excited when we looked up to see her. We bookended this moment with a meet and greet with Doug and Russell from UP. This meet and greet is a permanent part of the park for the time being. It has some adorable props and interactive elements to keep you busy while you are waiting. 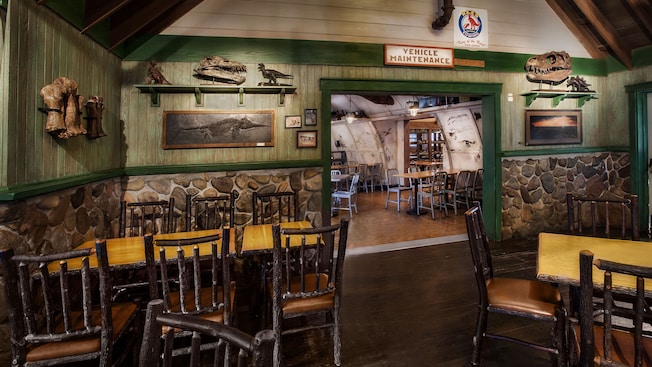 Since we had an early lunch, we needed to get some snacks for our day. We decided to try one of the Simba pretzels. I don’t know if it was the hunger or the moment, but that was one of the best pretzels. It had a perfect crust on the outside and a hot moist center. We also decided to head to one of our favorite ice cream hangouts at Walt Disney World. Dino Bite Snacks is located in DinoLand U.S.A. and is to the right of the entrance of the Restaurntosaurus. They have fantastic hand-scooped ice cream with some of your favorite toppings. They had a special ice cream sundae that celebrated the Donald Duck overtaking of DinoLand. It is called the Scrooge McDuck’s Billionaire Bacon Caramel Sundae. It was delicious and worth the try, but I don’t ever need to have bacon on a sundae again.

Don’t forget to visit Restaurntosaurus. It is a fun hamburger, and chicken strips counter service restaurant. It is beyond imagineered and so charming. Every room is like an added on building to a once home. Dinosaur bones and artifacts fill the walls and ceilings. Even the lighting goes above and beyond. It is the traditional food you expect at a theme park, but it is also an easy fix to picky palettes. The bonus is you can find a place to sit and complete a Mobile Order on your phone.

The one attraction Fiona was looking forward to on this trip was the reimagined Animation Experience at the Conservation Station. They closed down this experience at Hollywood Studios, leaving a hole in our hearts. We were so excited for its return and hoped the Wildlife Express Train that heads to Rafiki Planet Watch. We attended the last class of the day and got to spend it learning how to draw Bruce. I think this experience is so much more than it used to be at Hollywood Studios.

They have created unique videos that coincide with the animal that is represented in the drawing. They also focus on one individual biography of that animal at the park. We learned all about an epaulette shark, Sarge, that is located in the Living Seas at Epcot. There were lots of fun facts about the character Bruce and how he appears in The Incredibles movie. There is an option to reserve seating through a FastPass Plus, but there was ample seating when we arrived. It is set up like a conference meeting or a Comic-Con Q&A stage with three separate stages. The two stages on the ends housed the large screens to view the video about sharks and to see the lesson being presented by the animator. The animator was located on the middle stage with an overhead camera to project the lesson. We highly recommend spending some time here on your next trip. 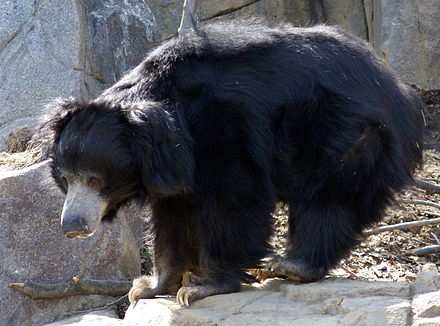 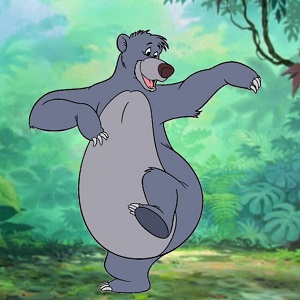 All this animation talk leads to an amusing conversation about what type of animal is Baloo from the Disney animated feature, The Jungle Book. We started a search for bears in the region of India. There seem to be subsets of bears in different regions of India. One is the sloth bear the roams through most of the lower regions India up to the base of the mountain range. The sloth bear is 2 to 3 feet high at the shoulder and has a body length between 4 and a half to 6 feet tall. The other bear is the Himalayan brown bear that lives in the Himalayan mountain range at the top of India. This male bear can reach between 5 to 7 feet tall. We concluded that Baloo was a hybrid of both of these bears. The hands favored the sloth bear, but the brown bear more traditionally represented the stance. Let the discussions begin.

The surprise of the evening was the end of the day at the Affection Station or as I like to call it the petting zoo area. They put all the animals to bed at 5 pm, and the animals know when it is time to go. Have you ever seen a cow run? They send in the larger animals first and then the goats and sheep. Of course, the black sheep bring up the rear. They aren’t too worried about missing out and know what is waiting for them.

One of the two things we were able to finally experience was the Finding Nemo the Musical. We were quite entertained by the musical. It was fun and lively with new music and is filled with fun stunts and puppetry. It ran a little long for some (Elias) and was too short for others (Fiona). I’m glad we were able to experience and take a break from the day. The show runs about 45 minutes, so it gives you time to relax. Not something we will see every trip, but it is probably the best stage performance at Walt Disney World.

The other treat of this trip was seeing Pandora at night. The nighttime here is stunning—so many beautiful lights and bioluminescence that fill the landscape. We felt like we had entered the wilderness that you see along the Na’vi River Journey. We had ventured through the land after our dinner at the Satu’li Canteen. It is always a fun place to dine, but they had significantly decreased some of the choices. I also decided that the bowls should come with recommendations. Not being familiar with the taste of the dressings makes it challenging to know what to choose. Fiona loved her Bao filled with grilled meat and cheese. It was just doughy enough for her. It was a great way to end our visit to Disney’s Animal Kingdom.

Before we have our discussion about the Animal Kingdom experience, we discuss how we are dealing with the new experience of social distancing caused by the outbreak of CORVID-19. Fiona and I were in Walt Disney World as the world changed. We were able to see how Disney, during the week, changed its policies and amenities to provide a cleaner experience. Eventually, on Thursday, March 12th, it became nationally known that they had chosen to close the parks at the end of the day on Sunday, March 15th. They did not announce this to the cast members and did not let them know what to expect until Saturday or Sunday. Email us when you found out that the Disney Parks in the states would be closing their doors.

We would love to hear from you and your family. If you have any comments, questions, or fun and fancy-free thoughts for us, email us at comments@dispodopolis.com. Please enjoy our latest podcast, Dispodopolis.